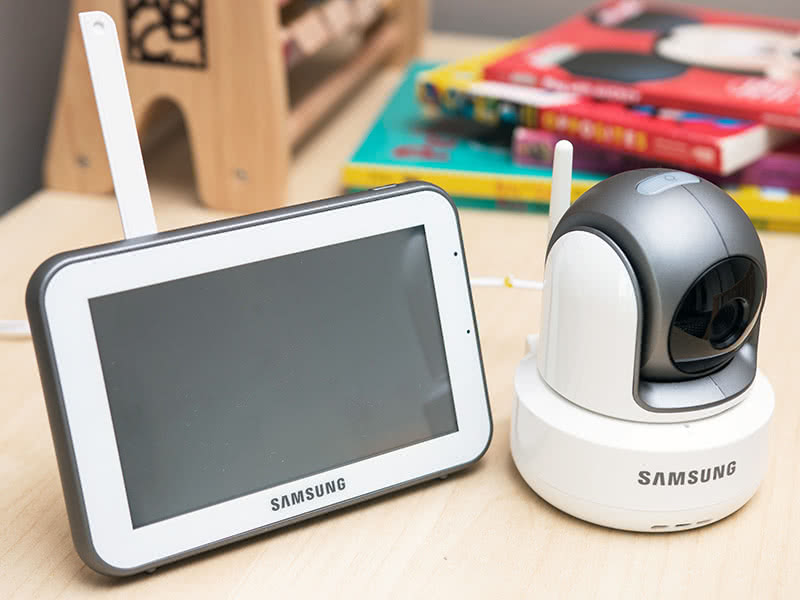 The Samsung SEW-3043W has been discontinued and replaced by the newer and improved SEW-3057WN. The new model is a significant upgrade from the old one, with the option to use both the monitor or your smartphone to keep an eye on your baby.
You can check it here.

Our Verdict on the Samsung SEW-3043W Baby Monitor

The Samsung SEW-3043W has an impressive 5” touchscreen with one of the best image quality available at the moment. You can add up to four cameras simultaneously and the baby monitor comes bundled with a whole range of useful features, such as room temperature, lullabies, and remote pan, tilt, and zoom.

On paper, it’s a great package, but in practice, we were disappointed by the signal range and battery life which limits the usefulness of the device. For such a premium price, we can only recommend the Eufy SpaceView over the Samsung SEW-3043W as it’s a superior product.

Continue reading our review of the Samsung SEW-3043W for the in-depth results.

Where to buy it:

Our Hands-on Review of the Samsung SEW-3043W Baby Monitor

Samsung is well known for its beautiful mobile phone screens. Even Apple uses their screens for their latest iPhone X. So it’s no surprise to see that the 5” touchscreen of the Samsung SEW-3043W is one of its strongest assets. You get a 720p video stream, which is the highest available among all baby monitors at the moment. When in range, it’s a sharp and beautiful picture.

But here lies the biggest drawback of the Samsung SEW-3043W. Maybe it’s because its video stream requires more bandwidth, but the range of this baby monitor is not as good as some of its competitors. And that can quickly become frustrating if you have a medium to large house.

And because of the high-resolution touchscreen, the battery life on the parent monitor tends to last much less than other devices.

Overall, the Samsung SEW-3043W has plenty of great features that you can expect for a premium baby monitor. But as one of the most expensive video monitor on our list, we think that the Eufy SpaceView is a better option.

The audio quality with the Samsung SEW-3043W is great. You’ll hear your baby clearly and the monitor will pick up the faintest of sound in their bedroom.

The video quality is where the Samsung SEW-3043W really shines. The beautiful 5” touchscreen gives you a 720p resolution, which is the highest we’ve seen from FHSS baby monitors at the moment.

You can, of course, adjust the volume and brightness of your display easily. The touchscreen interface is straightforward and easy to get around. And you can completely turn off the video picture on your display when you go to bed if you want. Since the Samsung SEW-3043W has a voice-activated (VOX) function, it will automatically alert you if your baby cries even with the screen turned off. And you can adjust the sensitivity of the VOX to avoid unnecessary triggers.

The camera on the Samsung SEW-3043W offers infrared night vision so you can clearly see your baby even in the dark or low light. The camera will automatically switch to night mode if the light is too dim in your baby’s room.

The range on the Samsung SEW-3043W is slightly below average. It wouldn’t be a big deal if the device was cheaper, but for one of the most expensive baby monitor on our list, we’re disappointed.

The baby monitor uses a wireless 2.4 GHz FHSS signal that can reach up to 800 feet / 240 meters outside, but realistically 70 feet / 20 meters inside with up to four walls separating you from your baby. Depending on your house’s layout, you might struggle with the signal quality in some rooms.

The Samsung SEW-3043W has an option to talk to your baby through the camera’s speaker if you want. The two-way talk function can easily be accessed by pressing and holding the microphone icon on the touchscreen. The sound only goes to the camera that is currently selected, so don’t risk waking up your child in the other room.

In our testing, the battery life on the Samsung SEW-3043W was one of the lowest, probably because of its high-resolution touchscreen display. It’s just enough to be used unplugged during nap time, but will require a charge before you put your baby to bed in the evening, and then again through the night. So about nine to 4 hours in total with the screen on. You can bump that up to 7 hours with the screen on standby. The battery takes about 5 hours to be fully charged. Your monitor will start beeping when its battery is almost spent.

Because the Samsung SEW-3043W uses an encrypted FHSS radio signal, risks of hacking and security breach are minimal. It’s impossible for someone to hack into the Samsung via your WiFi connection, they would need to be within signal range. They would also need to be able to decrypt the secured signal.

The Samsung SEW-3043W camera connects to its parent unit through a wireless 2.4 GHz FHSS connection. It means that an electromagnetic field (EMF) will be constantly emitted from the camera to the monitor in order for you to receive an audio and video feed. We recommend that you read our article on electromagnetic field if you want to understand what it means in terms of health and safety for your baby.

In our testing, the Samsung SEW-3043W camera produced a similar EMF reading than the other baby monitors on our list when placed 6 foot / 1.8 meters away from our baby’s bed. This is the minimum approximate distance for most baby monitor cameras. The Environmental Protection Agency recommends that you limit your exposure to 0.5 mG to 2.5 mG at a time. The further you place the camera away from your baby, the less EMF they will be exposed to.

Note that the parent monitor also emits EMFs. Most parent will sleep with the unit on their bedside table, but we recommend you move it further away.

Wondering what’s in the box? Here’s everything that will be included in the Samsung SEW-3043W package:

You can download the Samsung SEW-3043W baby monitor user manual from here.

WHAT WE ARE LOVING NOW

What are you looking for?

The information contained on this website, including, but not limited to, health recommendations, product suggestions, or dietary information, is merely the opinion of Baby Gear Essentials and should not be used as a substitute for informed medical or nutritional advice. For a full list of disclaimers please review our Terms of Use.

Crafted with ❤ BY OUR TEAM FOR YOU AND YOUR FAMILY